Here you will find a selection of projects we are working on or we have been completed and which we would like to present to you.

How can highly automated driving be made safe in the future? And which scenarios will drivers or highly and fully automated vehicles have to master so that tomorrow´s road traffic will cause less hazards?

A consortium made up of Saxon project partners have given attention to these and other questions in the SePIA research and joint developmental research project.

Starting point was the fact that for both the admission and also for a field investigation and including regular technical inspections of vehicles with highly automated driving functions there existed no adequate and generally recognised test and test concepts. Measures must be taken in regard to the warranty of a respectively high efficiency through the stages of development and especially about the whole life cycle of automated vehicles.

In the scope of SePIA, a complex manufacturer-neutral data platform with a multiplicity of different traffic situations in road traffic was developed and implemented as a functional model. The basis of the data is made up of real driving and accident data so that both „normal driving scenarios“ and critical scenarios and accidents can be illustrated. By means of the platform based on scenarios, the foundation was laid to measurably reproduce human driving characteristics and used as the reference for highly automated driving. Building on it, requirements for automated driving functions can be adapted which are used both at the registration and the field investigation including the general inspection of vehicles. By means of the prototype platform which is publicly available, SePIA contributed to making highly automated driving safe in the future.

The SePIA research project was funded by the European Union by funds from the European Regional Development Fund in the scope of the state initiative “2023 Synchronized Mobility“. This initiative involves the bundling of core skills of Saxon industry and research companies and establishes innovative research results (e.g. in regard to new vehicle concepts, assistance functions or IT networks). With the help of SePIA, this objective can be implemented in practice. At the same time, Dresden as a research hub will be strengthened.
This project is part of the state initiative “Synchronous Mobility which ran from June 2017 to November 2020. The European Union funded this project with funding made available by the European Funds for regional development.

MeBeSafe is a research project funded by the European Union. It develops and tests solutions to persuade vehicle drivers and bike riders to behave safely in common traffic situations that occur with an increased risk. This project also compares different types of coaching.

Traffic behaviour is mainly based on habitual behaviour

Navigation in traffic is something most of us do every day and our behaviour is mainly controlled by automatic reactions. Automatic behaviour itself is, in principle, not dangerous. It can be found everywhere on a scale from high safety margins and up to highly risky.

Many safety measures taken in road traffic do not reach their potential because they appeal to consciously made decisions. However, the ordinary road user will consider road traffic first and foremost as an habitual task and not think about it too much.

By applying nudge approaches, road users are instead encouraged to make a safe choice without even thinking about it. All options, also those considered being unsafe, are still open so that nudging is less intrusive than absolute prohibitions are.

Road accident statistics clearly show a great many of profound causes and factors, which can be summarised into three categories.

MeBeSafe tested and developed 8 safety measures to make road traffic more safe. Among those measures are roadside lights, new markings for bike paths, movable balls and an app helping lorry drivers to coach each other.

The use of automated assistance and driving functions helps to increase road safety in everyday life. However, this also requires an overall inspection of the type of the vehicle in regard to performance, condition, function and effect over the whole life span of the vehicle. How can an efficient testing technology be developed and which tools for testing will be used?

Co-ordinated by the FSD GmbH and together with other partners, the project „ErVast“, which is funded by the German Federal Ministry of Transport and Digital Infrastructure, is developing a test procedure used for assistance systems and automated driving function in vehicles, which is supposed to be used at the regular general inspection. Existing test records and evaluated road collision scenarios are the basis of an extensive testing of the functions.

Based on real road traffic accident data, the VUFO is working on test scenarios for this project. First, different road collision scenarios gathered from the entire traffic situations will be analysed and grouped based on the GIDAS data base. The focus of this project is on road accidents involving cars in urban areas. In regard to these road accidents, other dynamics or surrounding analyses will be conducted to subsequently identify relevant parameters (e.g. position, speed, acceleration of those involved) for a testing scenario. In addition to the relevant parameters, exemplary testing scenarios will be carried out in CarMaker, OpenDRIVE and OpenSCENARIO. Based on the emerging prototypical pool of testing scenarios, tests which are specifically made for the respective vehicle type including the necessary test setup can be selected.

LEONARDO is a European H2020 Project researching the safety, use and reduction of costs of the smallest electric vehicles in public road traffic.

It is aimed at developing a new vehicle concept in the field of micro mobility with an improved energy efficiency, increased safety and new solutions in regard to system integration such as a modular battery pack and to test this concept as a prototype in different European cities.

The VUFO is involved in this project by developing a basis for the driving concept, which will be developed in LEONARDO, in regard to safety technical and technological- legal requirements and to give information about user situations and accident situation in different countries.

Furthermore, the demands made by the car users will be derived.

This project started in January 2021 and it will continue to run for three years.

The project SECUR aims to study the potential of connectivity, especially of V2X technologies, to improve the safety of different road users. As result of SECUR a coherent proposal for V2X testing and assessment protocols to the Euro NCAP next roadmap is expected. The geographical scope of the project was Europe.

To deepen the accident scenario, an in-depth study was conducted using the accident data from the GIDAS database. Here, passenger cars were focussed as EGO vehicle. For this purpose, the consortium developed a scenario catalogue for accidents involving passenger cars. The catalogue contains a total of 28 accident categories. These were combined with the conflict partners (e.g. passenger cars, PTW, pedestrians) of the accidents – and built up into a huge number of more than 100 scenarios. With these basic definitions, the in-depth study was conducted for the 15 most relevant accident scenarios and consists of a set of 16 analysis parameters for each.

The methodology as well as the individual detailed data analyses were developed and processed in close cooperation with the SECUR consortium.

The VUFO team is very proud to be part of this important project and we are aware that with the help of our data processing we could take another step towards safer road traffic – in the near future.

Here you can find more information about the project. 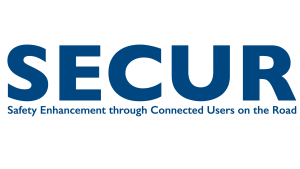